Added all picture sleeves to 2017.

All pages from 2000 to 2017 have been reformatted to coincide with all previous pages. Working on 1985 to 1999 to update all labels and formatting.

Stan and John finished missing peaks in the 70’s.

We’ve just added the page, All One-Hit Wonders (And their song) to the site. You can view that HERE.

Jarrett has loaded up the 2016 charts along with pictures/labels. You can check it out HERE.

Jarrett has added 2015 to the site, complete with sleeves/labels. Check it out HERE

Jarret has just added and uploaded the complete 2012 charts, including all photo sleeves.

Happy Holidays everyone from John, Jarret and Stan

Jarrett just uploaded all of 2011’s Top 40 charts, including all photo sleeves.

Jarrett has uploaded the charts for 2008. You may view that page HERE.

Jarrett has added labels/covers to 2005, 2006 and has added 2007: All Charts and it’s labels and covers. At this point the labels are no longer relevant, so we are now loading up the covers to the single, or the album, as singles are becoming extinct in the physical form. You can view 2005 HERE, 2006 HERE and 2007 HERE.

In addition to Jarrett’s new pages and cover artwork uploads, Stan and I are working on 1964 presently, correcting mistakes, typos and any misinformation originally posted. The 1950’s and 1970’s are fully complete and the 1960’s up to 1963, as well.

Corrections are still being made constantly. The 1950’s and 1970’s are complete. Now we’re onto the 1960’s correcting all typos, misinformation, errors and the such. Once the 60’s are complete, the 80’s will be next. Thanks for your patience.

Jarrett has completed and posted the year, 2006. Sleeves and labels will be posted soon. See that page HERE.

In addition to Stan and John’s daily chart corrections of the 1950’s and 1960’s, Jarrett has just posted 2005 and will have 2006 posted very soon. CD covers/labels for those two years will also be posted in the very near future. you can view 2005 HERE.

The page, “1980”, had issues with the entries, “Brass In Pocket” (Pretenders) and “Breakdown Dead Ahead” (Boz Scaggs), being reversed on the charts beginning on April 26, 1980. Those have been fully researched and corrected accordingly. Thanks to Kelly Dean Hansen for pointing out that error and to Stan for getting that research done immediately and accurately. You can view those correction located HERE.

Jarrett added and updated the 2004 charts – pictures of labels coming soon. Meanwhile Stan and I are cleaning up and updating chart information. We are on 1973 at the moment and will be working on all charts to ensure all typos, errors and chart information are 100% correct. From Jarrett, Stan and myself, HAPPY HOLIDAYS EVERYONE and HAPPY NEW YEAR! Hope 2016 is the best year of our lives.

Happy Thanksgiving. A lot of charts are being corrected with the help of Stan Messmer. Not to mention the 2000’s are exclusively being compiled by Jarrett Nolan. All of this is helping to make the Weekly Top 40 as accurate and as error-free as possible, and has inspired me to keep up with the charts and these pages as I did when I first began posting these back in 2005 as just a hobby.

In no time flat we should be at 100% accurate on all of these charts. I appreciate all of the corrections, comments and suggestions, along with the new friends I’ve met, and all of the help I’ve been getting from the occasional visitor, to make these charts (one of the) go-to places on the internet to find your accurate and fact-filled weekly Top 40’s.

I have suggestions for Country charts, R&B/Soul, Disco, pre-1955, Cash Box charts, Mainstream Rock and many other really great ideas for pages to post. And as soon as these Top 40 charts are 100% done, we will begin working on the other charts. Please be patient with me and have a great holiday season.

Special thanks to Jarrett Nolan and Stan Messmer. Your work is invaluable to me, and to everyone enjoying these Top 40 charts.

Added a great addition by Stan Messmer called The Difference in Billboard and Cashbox Magazines #1 Singles. You can find that HERE. I’ve also added Stan Messmer and Jarrett Nolan as official partners of Weekly Top 40. All three of us will be able to work on more materials, fixing issues and adding the years 2000-2016 in time. As of today we’ve been able to add 2000-2003. We are hoping to have 2015 by the end of the year.

Corrected the entire NEW ENTRIES for April 9, 1966 (Thank you, Stan Messmer for pointing out that error and giving me the correct chart info). Also corrected an odd little faux pas of The Dells’ 1971 release, “The Love We Had (Stays On My Mind)” Again, thanks Stan for pointing that one out.

Jarrett Nolan has added the year 2003 charts. Photos are coming up soon.

Jarrett Nolan has added 2002 to the charts and currently working on a series of Year-End charts for posting at a future date.

Well, as you can see, it’s been many months since the last update, but things are beginning to forge ahead again. Jarrett Nolan completed the year 2000 (without the photos of the label/cover artwork of each week – but that is only temporary as I get all of those in order).

Finished 1955 to 1959 weekly Top 40 charts, after working all Summer to get them accurate. However, I will need to revise them to clean up the information due to most charts included information of the song’s placing on the AIRPLAY charts, DISC JOCKEY PLAYS charts and JUKEBOX plays, causing more information for each line. I’m also working on reformatting the pages for a more clearer view of each charts. That’s proving to be a challenge, considering I tried using tables on each week’s entries, but the WordPress formatting has made each page load too slow. But it looked really nice. So I’m working on figuring out a nicer looking format for these pages that includes photos for each week’s #1 hits, and maybe some photos of artists, that will load quicker.

A Casey Kasem tribute was added to the main page. It’s a few months after his passing, but I felt it was important to include his tribute on a blog that was originally inspired by him back in the 70’s.

I finally began incorporating the Singles Chronology into this site as the information are both so closely related. This has been done in exchange of making both sites a separate entity. Now they will be known as one web blog site. That link is now on the main menu on the top of each page.

That kind of oversight may happen occasionally due to binge posting and possibly getting too tired to pay attention. I welcome all correction in order to make this site as accurate and complete as possible. Thank you 🙂

Also added at 6:06 PM, labels for the entries on the #1 Singles By Two Different Artists page, located HERE.

Finally have all of the 60’s finished. Now to get on with the 50’s and other things I’m wanting to add here. Thanks for the support and kind words. All emails are appreciated 🙂 Happy Holidays.

Finished 1962-1965 with labels/picture sleeves. Have a wonderful holiday, everyone. 🙂

I will continue working on the 1960’s tomorrow and, at this rate, may have the 60’s finished before the end of next week. I can only hope. I am posting each update as they are completed.

AND PLEASE NOTE: This UPDATES page will be accessible, but archived, and no longer updated once all the charts pages and information are all completed.

Hello all and thank you kindly for the amazing emails, messages and responses to the site.  I’ve been ill lately but decided this was worth the time and effort to complete before it gets too hard for me. So as of this very moment, I have just posted 1960.

I suspect that the 1960’s will complete before January 2014 (with any luck, I’m more hoping for the next week or two). I’m actually excited to be back into finishing my long time planned project, that has been a goall of mine since my childhood.

Again, thank you all so kindly and I hope to be adding much more before 2014 begins. And everyone have an amazing holiday season 🙂

The traffic for this site has increased rather measurably. I am inclined to get started on the 60’s, 50’s and then the 00’s (in that order). On my INTRO page, I asked you to follow the blog to get updates. WordPress has a button that is offered to make it easy for you to follow, but I was reluctant to post the button in fear of over filling your email inbox with updates – because once I get started on working the pages, I will do dozens in one day at a time.

I will add the ‘follow’ button once I am finished with those three decades mentioned in order to avoid creating that inbox mess I can create with updating so many at one time.

Thank you so much for stopping by, please feel free to take the information provided as you see fit. Enjoy the knowledge, use the knowledge and always come back for more additions as time goes by. 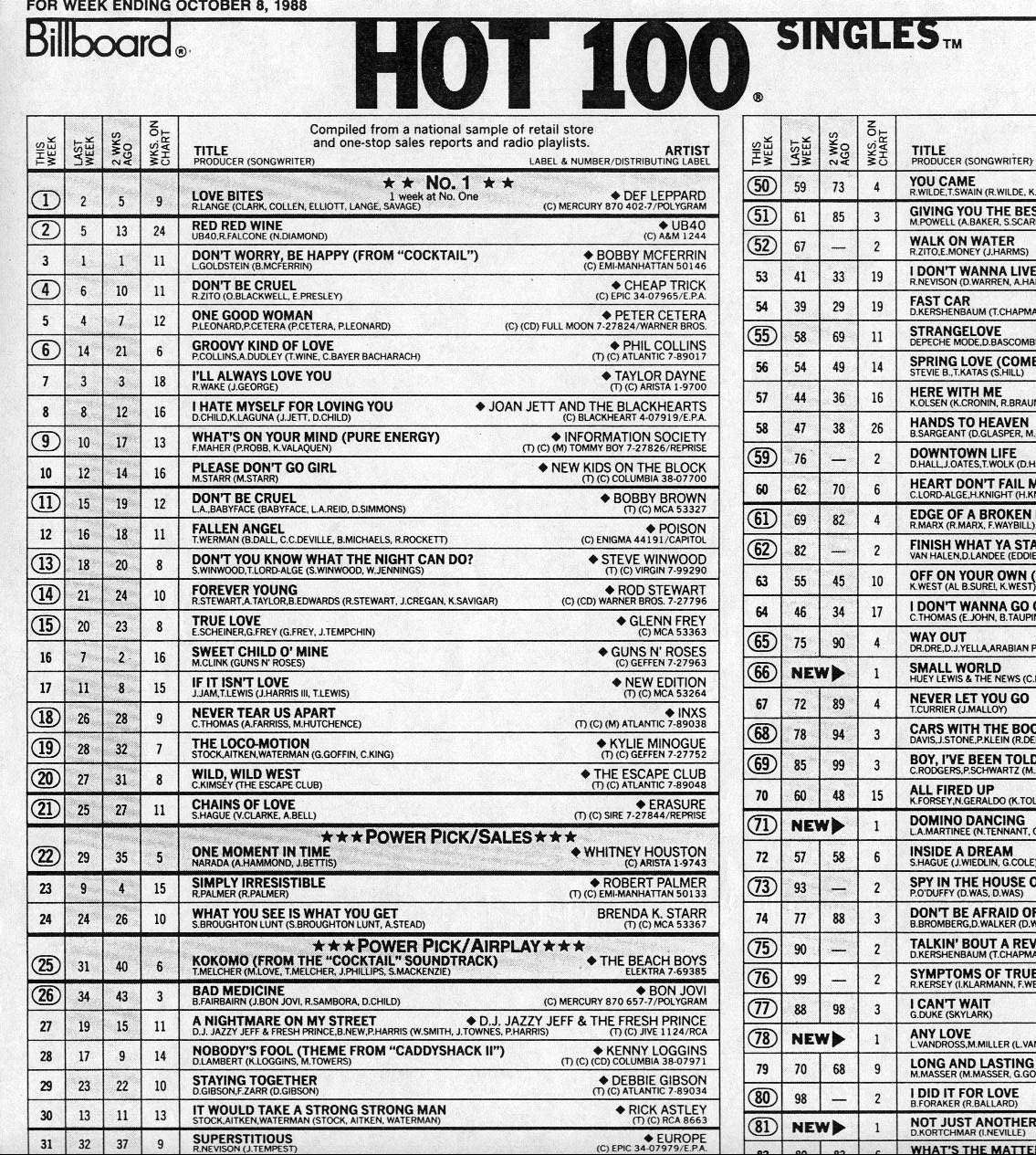 CLICK ANYWHERE ON THE PHOTO TO SEE OCTOBER 8th, 1988